Everything is OK with OKFM99.5 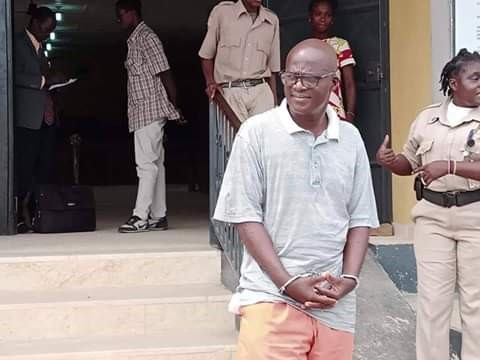 Brown was murdered on April 15, 2018, in a case that initially sparked concerns over the safety of journalists in the country.

Speaking on Friday, Feb. 28 after he took the stand to testify on his own behalf, Williams recounted that on April 15, at about 11 p.m., he was informed by his niece that an unknown person was knocking at their window, so he decided to come out to know what was going on.

So I decided to check outside, but I took a knife with me because too many criminal activities go on in our community,” Williams told the court.

The suspect said that when he came out, he noticed that Brown was standing in the compound without any apparent purpose, which then prompted Williams to ask the journalist questions. According to Williams, Brown then started insulting him, which then resulted in a fistfight between the two men.

Instead of him responding politely, he decided to insult me, so I told him to leave the compound and he refused,” Williams said.

As the two men tussled, suspect Williams said he felt suddenly overpowered by the journalist, which prompted him to pull out a knife and stabbed Brown three times in the back, hoping only to scar him or temporarily disable him. But the stabs were more serious, leading to major wounds.

Williams said when he attempted to rush the victim to the nearby Kingdom Care Clinic, he was cautioned by an unidentified man not to do so out of fear of being linked to Brown’s death. Williams recounted dumping the journalist’s body on the roadside close to the medical facility.

But, making a final ruling on Tuesday, March 17, 2020, Judge Nancy Sammy of the 11th Judicial Circuit said Prosecution proved beyond reasonable doubts that Journalist Brown was intentionally murdered by Williams.

Judge Sammy told the Court that all evidences provided by the Prosecution proved  that the deceased was not a Criminal as was insinuated by Williams.
According to Judge Sammy, Prosecutors also established that Brown had been visiting his Friend Edwina Toutee,who is believed to be a niece to Williams prior to the night he was stabbed and killed.

The Judge maintained that Williams intentional refusal to take the deceased to a nearby Hospital proved him guilty of the crime of murder.

Moreover, Judge Sammy said the theory of Temporary insanity and self defense pushed by Williams Lawyers could not last as record also proves that the decease had no weapon to have placed Defendant Williams at risk to defend himself.

However, Defense Lawyers have announced an Appeal to the Supreme Court.

Lawyers’ of the defendant claimed that their client Williams killed Brown in self defense and due to temporary insanity was meant to seek sympathy from the Court.